The results of еnvironmental research in the Oka River,
concerning microplastic contamination 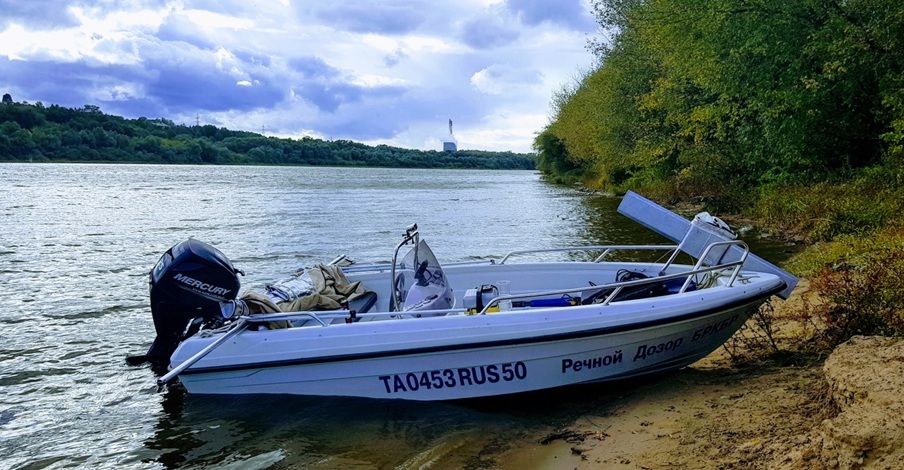 Introduction
During a comprehensive study, which was conducted by the non-profit foundation "Clean hands, clean rivers" from the 16th to 19th of September 2019, the members of the foundation collected and analyzed samples of water at more than 20 locations along the 180 km of the Oka River within Moscow region. Analyses of the samples for the content of microplastics, nutrients, and heavy metals were the key points of the research. At the same time, the main hydrochemical parameters of river water were inspected and monitored. This report includes the results obtained using the technology for analysis of microplastic presence in the water, which was partially developed by the members of the "Clean hands, clean rivers" foundation.
Equipment used
· During the sampling and subsequent analysis, world-class equipment that was developed in Russia, was utilized
· LEI-MANTA300 kit manufactured by "EcoInstrument" was used to determine the content of microplastics.
· LEI-5000 kit manufactured by EcoInstrument LLC was used to control COD.
· The analysis of biocoenosis (ammonium, nitrates, nitrites and phosphates) was carried out on a HACH DR / 3900 instrument using LCK cuvette tests. The analysis of samples was performed on the sampling day.
· Hydrochemical parameters of the water were monitored by YSI EXO-2
· Samples for the determination of presence of heavy metals were preserved using nitric acid for subsequent analysis using the (ICP-MS) method in a certified laboratory. 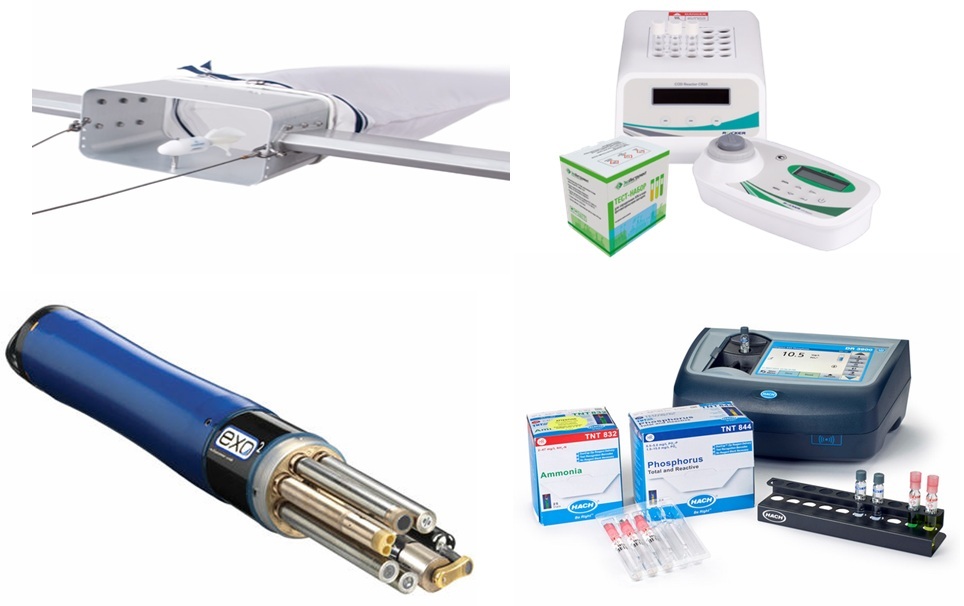 The route of the expedition and the points for sample extraction
The expedition began at the rural village of Drakino, which lays on the border of the Kaluga region and continued through the towns of Serpukhov, Kashira and Kolomna up the border of Moscow region with Ryazan region. There were mutltiple sampling points along the way.

Evaluation of the collected hydrochemical data 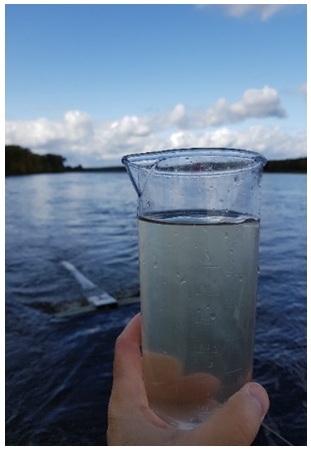 The following data was obtained using YSI EXO2 and should be used to assess the general quality of water. The average level of mineralization was about 250 mg / l with an increase to 270 mg / l below the Nara river and up to 300 mg / l below the confluence with the Moscow River. For areas below Kashira and below Kolomna, a significant decrease in the concentration of dissolved oxygen can be seen, however, it does not reach critical values. Furthermore a decrease in the content of chlorophyll and as such, the opaqueness of water lower down the river can be seen. The pH values and the amount of algae are within the acceptable limits.
Analysis of microplastic particles in the river
Multiple different types of microplastic particles could be identified within the river, which indicates a variety of pollution sources. The most common type of microplastic are synthetic fibers which can be several cenitmeters long. A notable amount of plastic fragments of different shapes and colours as well as residues of polymer films can be seen. The amount of microplastic particles is relatively small and gradually decreases all the way from Serpukhov up to Kolomna. However during the confluence with the Moscow River those values are increasing at an alarming rate. Lastly, 15 km from the confluence of with the river, the amount of microplastic particles gradually settle and are caught by aquatic vegetation, which results in acceptable values once again.
The average microplastic content is about 0.5 particles or 0.19 mg per cubic meter. When taking the average flow rate of the river into the equation, a total amount of microplastic that enters through the Moscow River can be estimated at about 2.5 tons per year or 6.8 kg/day. 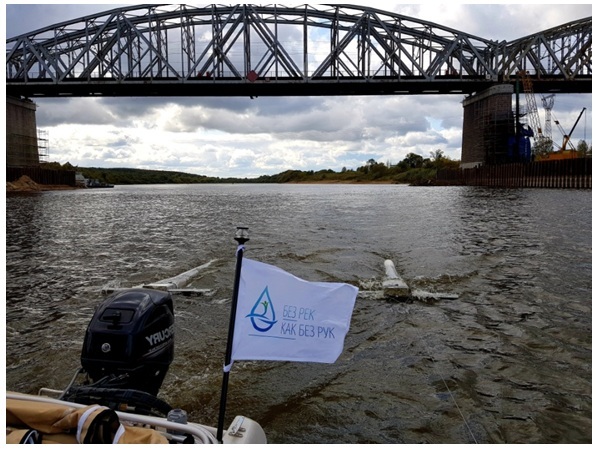 Microplastics in the Oka River 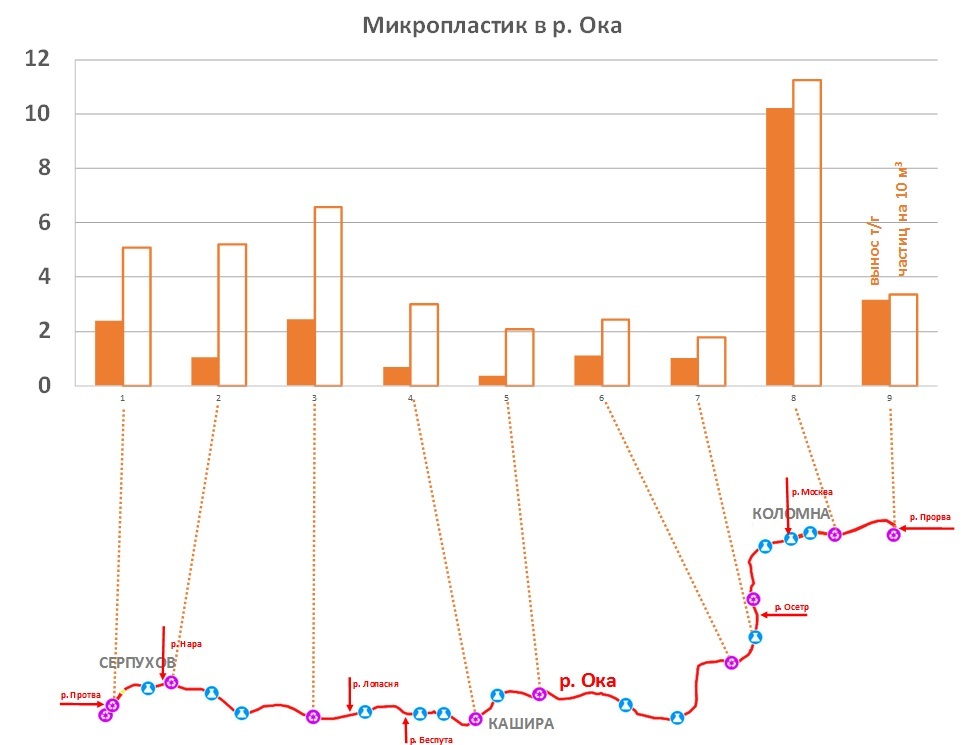 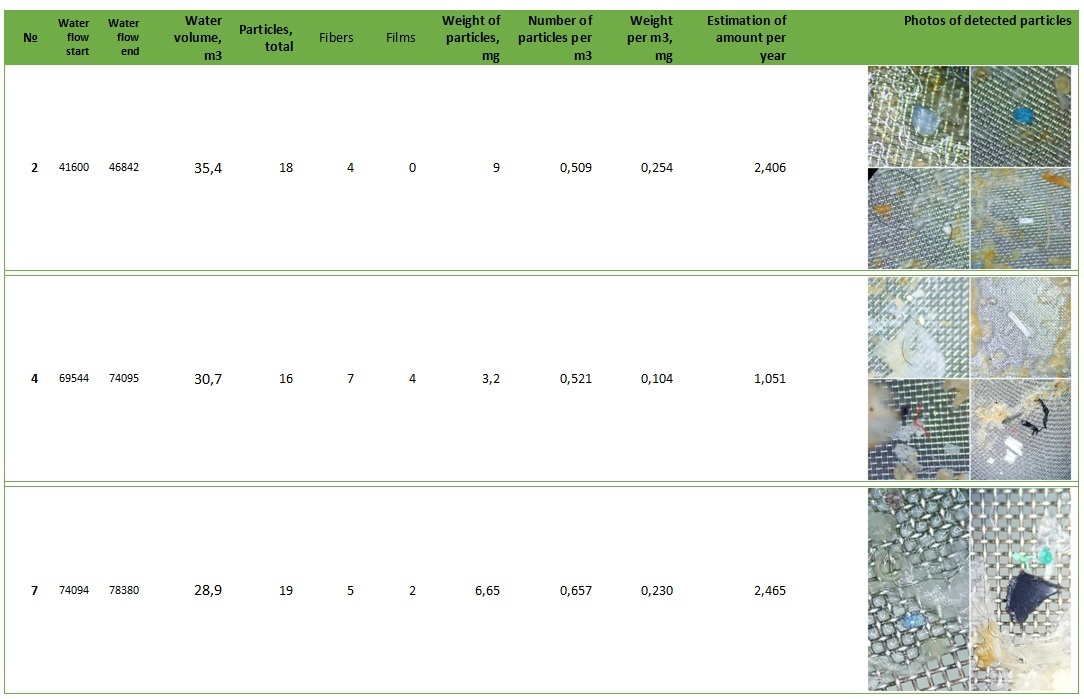 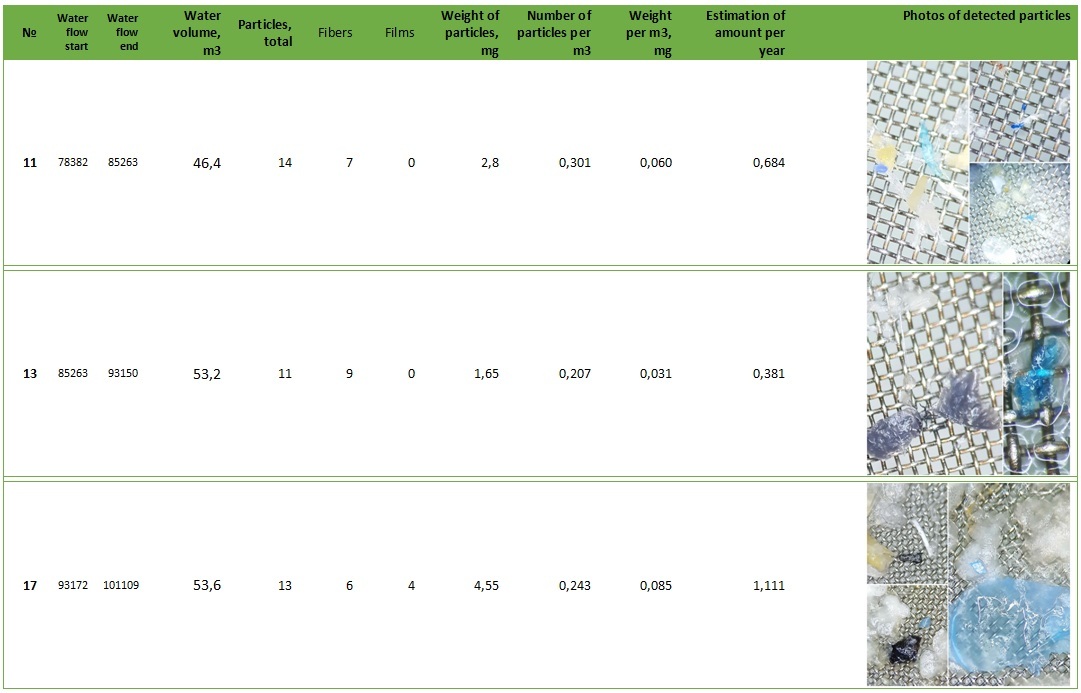 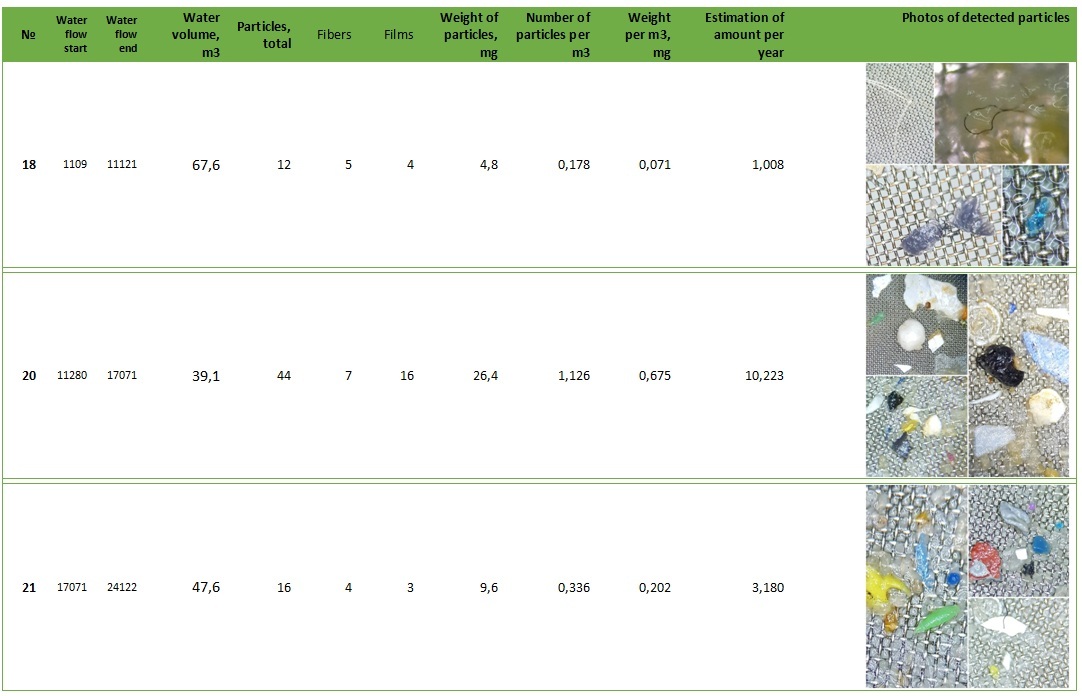 Conclusions
This research covers only a small area of 180 km out of total 1500 km of the Oka River, which however, has a decisive effect on the state of the Oka River all the way to its confluence with the Volga River. Due to the physical and geographical features of this area such as the presence of karst and direct bedding of Devonian and Carboniferous sediments at the surface of the upper river basin cause a high content of iron compounds, manganese, strontium and aluminum. The beginning of the site studied is characterized by an increased COD (Chemical Oxygen demand) value, which gradually decreases to the recommended level downstream, which can also be characterized as a natural feature.

Anthropogenic load becomes truly noticeable after the confluence of the Oka and Moscow rivers. In this area, the content of nutrients increases hundreds of times and exceeds tens of times in MAC, and the main problem is nitrites (more than 40 MAC) and the decrease in dissolved oxygen to dangerously low levels (less than 6 mg / l).

But the most striking example of human exposure is the microplastic content in water. In the Serpukhov region, more than 0.4 particles per cubic meter of river water were found, and below Kolomna, this number rises to 1.1 particles, which is equivalent to more than 10 tons of plastic per year. Furthermore, in areas with a relatively low population density between Kashira and Kolomna, less than 0.2 particles were detected. Apparently, a significant part of the microplastic that enters the river accumulates in the bottom sediments and in the coastal areas, which will become a problem for future generations.
According to the results, that were derived from the analysis of the presence of nutrients, metals, microplastics and hydrochemical indicators, the Moscow River has a major negative impact on the studied section of the Oka River. 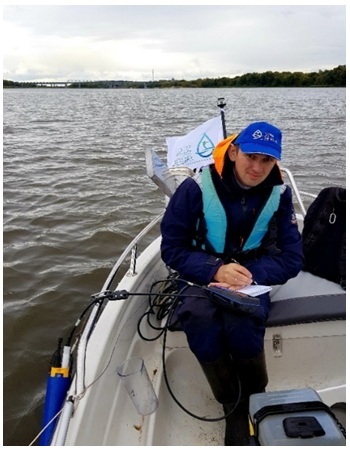