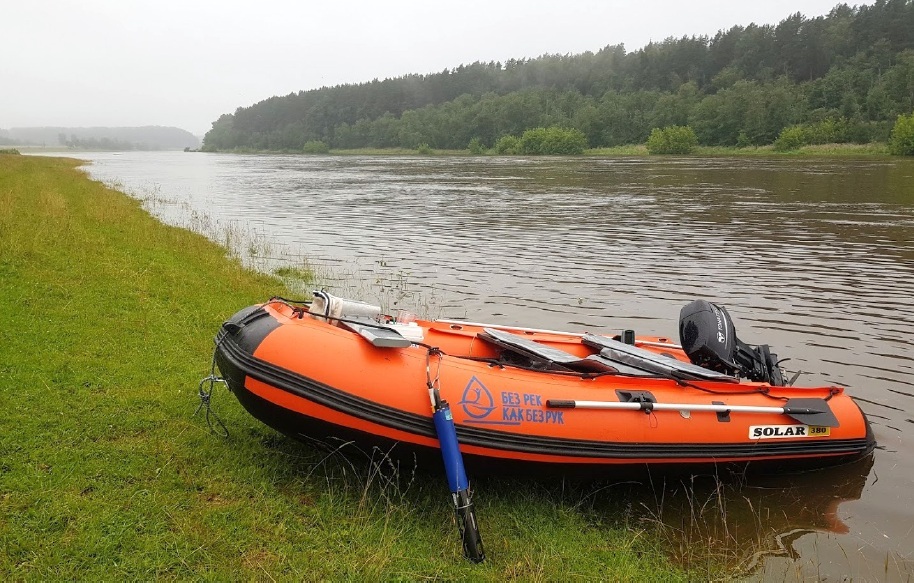 Introduction
During the expedition, which took place from 12th to 18th of July 2020,a comprehensive research was carried out by the non-profit foundation, which was assisted by the students of the Moscow State University and covered 400 km of the Volga River in the area from Lake Volgo to the village. Gorodnya in the Tver region. The research included analysis for microplastics, biological pollutants and heavy metals. Simultaneously, the main hydrochemical criterias were examined carefully. This report includes the results which were obtained using the methods co-developed by "Clean Hands, Clean Rivers" foundation
Equipment used
Sampling and subsequent analysis featured Russian-made equipment and devices from leading international manufacturers , which were being used in compliance with certified measurement methods:

• LEI-MANTA300 (manufactured by Ecoinstrument LLC) was used to determine the content of microplastic particles in the water. The device is capable of filterung 100 μm and 300 μm particles.
• Analysis of nutrients (COD, ammonium, nitrates, nitrites and phosphates) was carried out using a HACH DR / 3900 device in compliance with the certified methods for this device
• Various hydrochemical indicators were monitored using an EXO-2 (manufactured by YSI)
• samples for the determination of heavy metals in the water were preserved using nitric acid and stored for subsequent analysis in a laboratory using AA-ICP method. 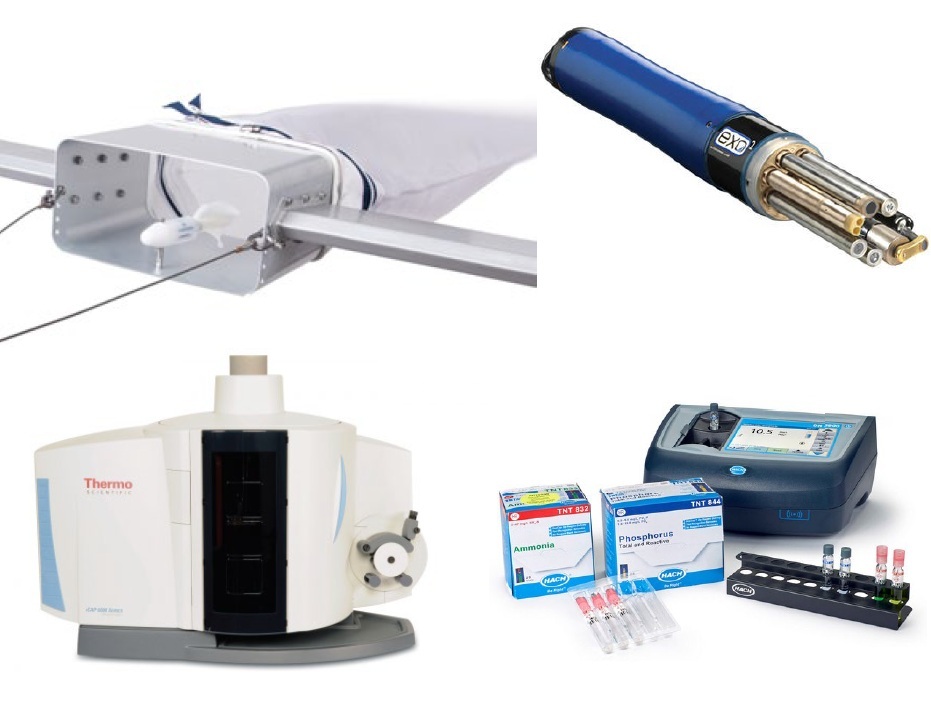 Expedition route and coordinates of probe locations
The expedition started in Selizharovo (Tver Region) and continued through Rzhev, Zubtsov, Staritsa and Tver, to Gorodnya, covering a total of about 400 km. Various samples were taken in the following locations: 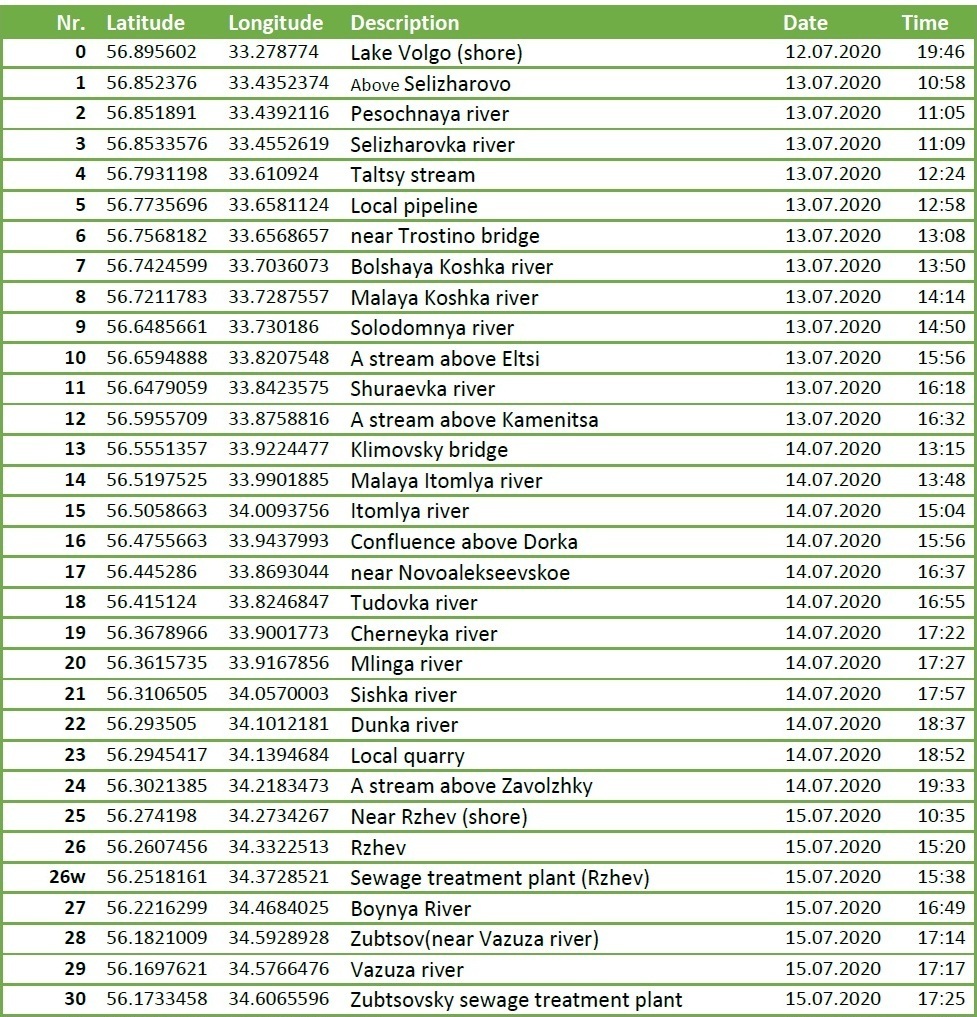 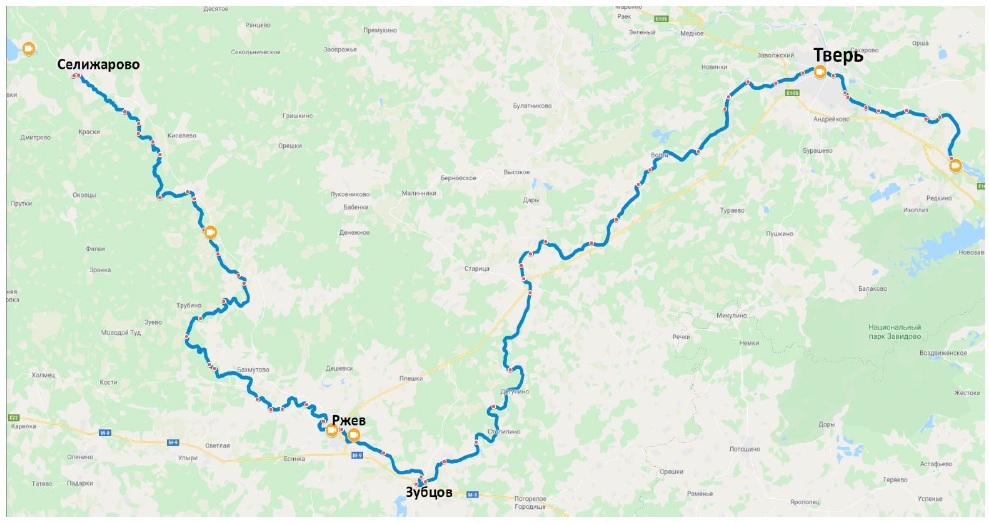 Results of hydrochemical analysis
The following data was obtained using the YSI EXO2 and used to assess the overall state of the water.Chromaticity measurements were carried out using the HACH DR / 1900. A low level of mineralization (less than 100 mg / l) could be seen in the early samples with the levels increasing up to 180 mg / l further down the route, eventually reaching the abnormally high value of 526 mg/l in the sampling point №54. The levels of dissolved oxygen were close to their maximum values (8 mg / l), in all monitored areas with the exception of points No. 54 and No. 57, which show lower values at 6mg/l. The turbidity measurements were negatively affected by the harsh weather conditions. The pH values were within the normal range and approached the critical value of 8.5 pH just once at the point No. 15. Lake Volgo and the Volga River are characterized by the unusual colour, that correlates with the content of chlorophyll, indicating its non-mineral nature.Wide fluctuations in chlorophyll concentration could be observed at the points No.26 and No.54. No harmful blue-green algae could be found. 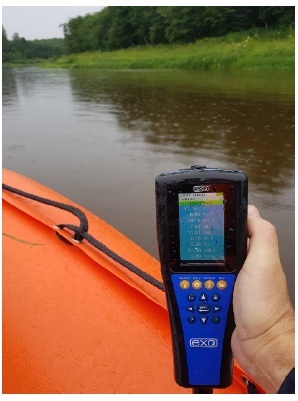 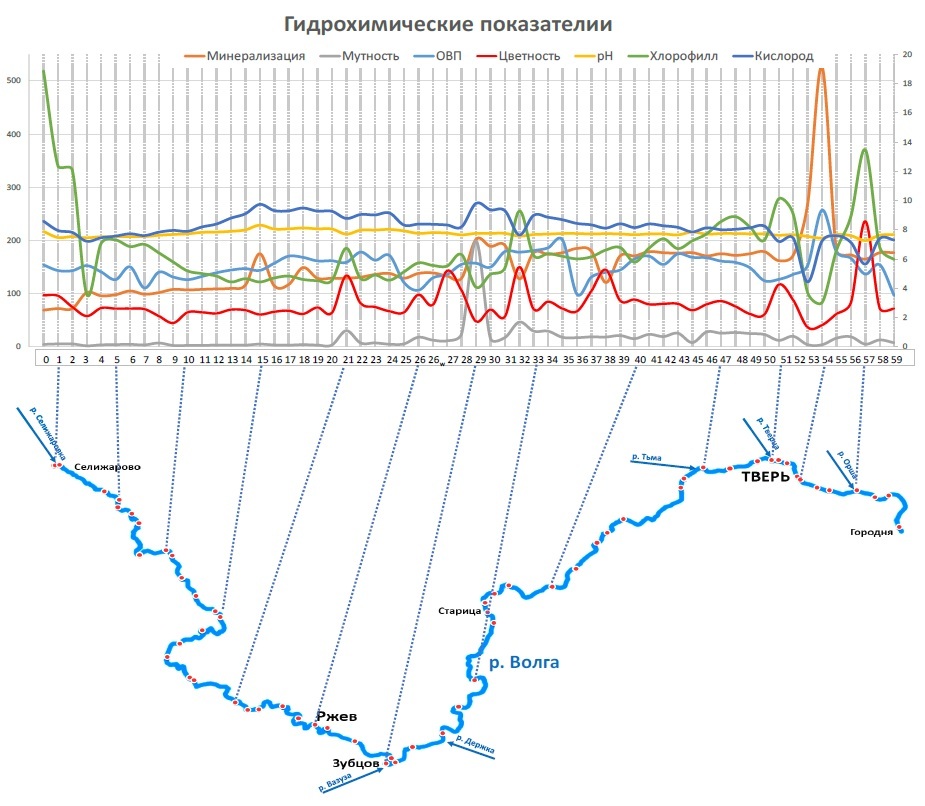 Nutrients and Minerals (nitrogen, phosphorous, organic matter)
The following section includes results for substances , which can only be detected in newly collected samples using a portable mobile laboratory. These include: ammonium, nitrates, phosphates and COD (chemical oxygen demand). 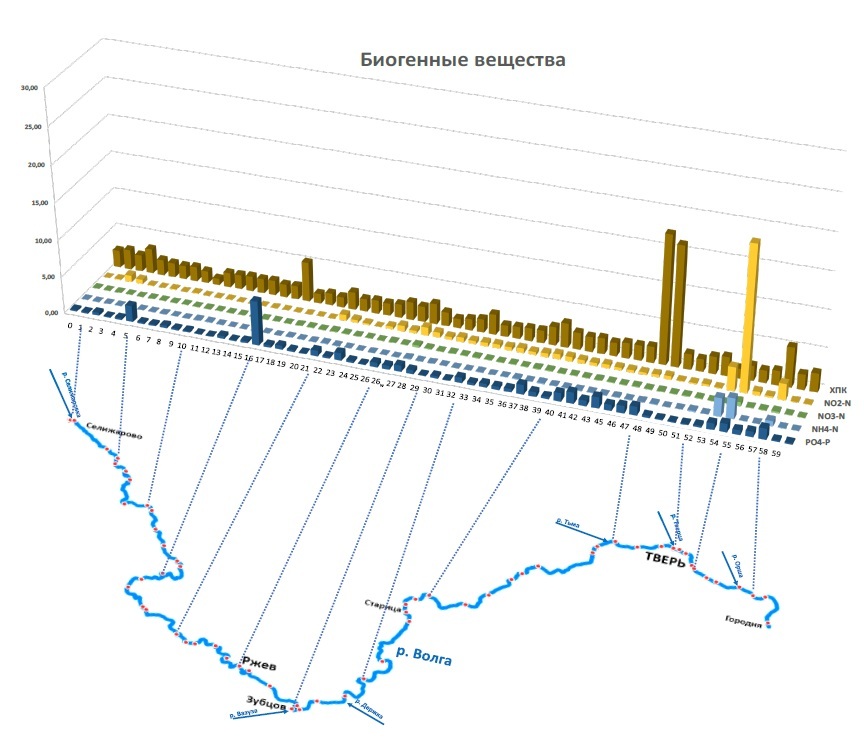 COD
The level of COD is not representative of hazardous substance content ,it can however, serve as an indicator of the level of organic matter present. The measured COD values exceed the recommended ones by about 2 times, which is not critical and can be caused naturally. An increase to 70-80 mg / l could be seen at points No. 17 and No. 57; points No. 47 and No. 48 showed an abnormally high value of 250 mg / l (15 times higher than the recommended amount), which is more typical for sewage waters than for river. The measurements were carried out three times. Other parameters showed values which remain within the normal range; this anomaly could potentially be caused by the local pollution caused by organic matter. As the river water dilutes further downstream, the COD returns to its normal values. 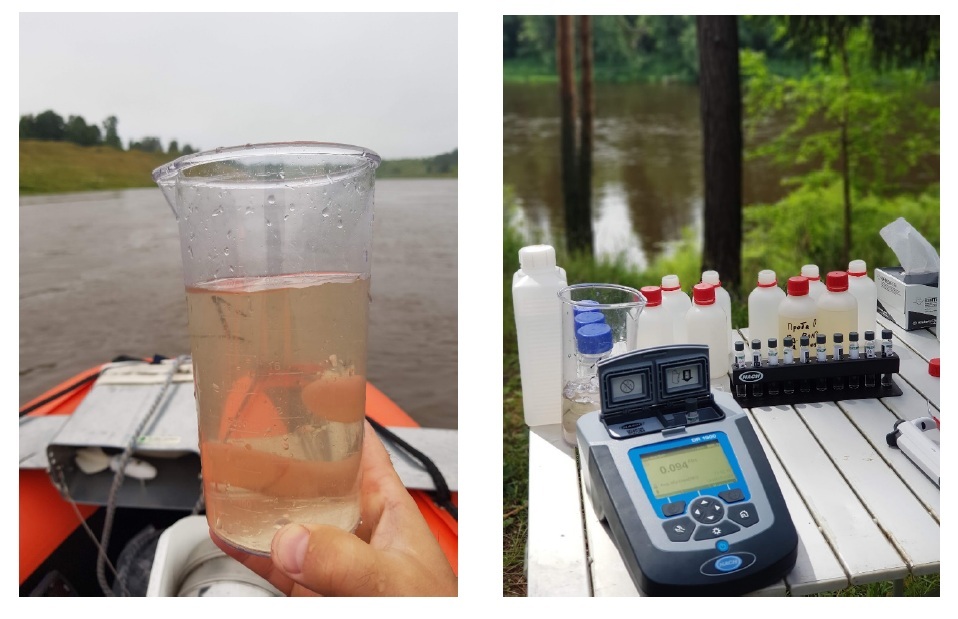 Nitrogen
The levels of nitrogen do not (with some rare exceptions) exceed the norms.An excess of nitrite nitrogen could be observed at points n. 27, n. 53 , n. 54 and n. 57. Samples collected at points n. 53 and n. 54 showed excessive levels of ammonium nitrogen. All of these could be associated with untreated sewage, fecal matter and other types of waste, which accumulate in that part of the Volga.
Phosphorous
Excessive amounts of phosphate phosphorus was found only in samples Nr. 5and Nr. 16. This data was not confirmed during the later analysis, which is caused by the deposition of phosphates during the preservation. Points 40-47 showed a minor excess. None of the points showed any evidence of sewage discharge.but there is a slight increase in total salinity. A possible reason for the increase in the concentration of phosphates in this case is the ingress of fertilizers washed off the fields by rain. Slight excess of phosphates downstream at points No. 54 and No. 57, obviously, are associated with the ingress of poorly treated household fecal wastewater, which has already been noted above using nitrogen as an.
Heavy metal content 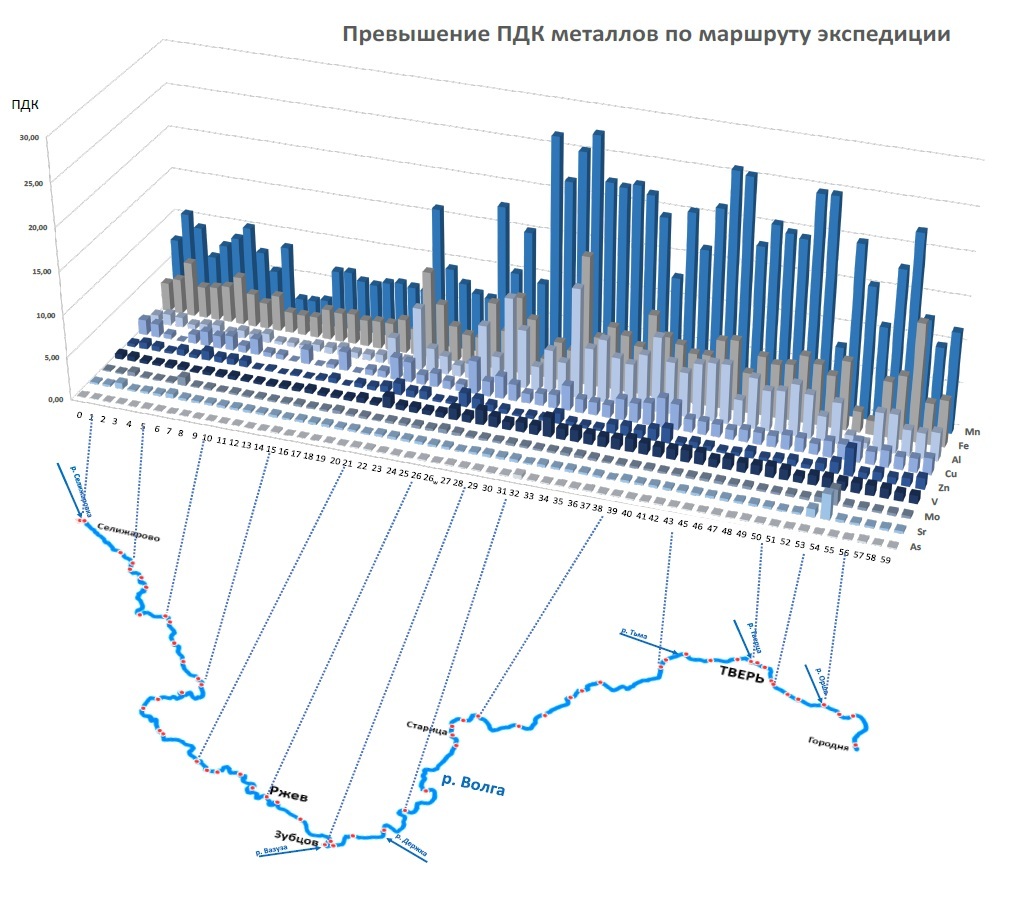 An excess of manganese, iron and aluminum was observed during the study. The levels of these metals exceed the ecological and hygienic norms. The water does not post any threat to the population since it is not consumed. The levels of vanadium and zinc exceeds the norms by 1-1.5 times in half of the collected samples. An excess of copper was found in most of them. The contents of boron, silicon, lithium, potassium, calcium, magnesium, barium, chromium, cobalt, nickel, cadmium, arsenic, selenium, lead, beryllium, tungsten and tin do not exceed the established MPCs, but several curious jumps in the background contents for a number of points can be noted :

• points Nr. 5 and Nr. 16, showed an excess of phosphates, and increasing levels of nickel, copper and lead.
• minor traces of gold (0.012 μg /L) could be seen at point Nr. 23 and in several subsequent points further downstream
• the levels of tungsten at the point Nr. 53 exceed the background value by 20 times and is 0.3 MPC
• the confluence at the point Nr. 54 showed a major increase in content of nearly all metals (the norms were not exceeded). The increases in concentration of chromium, rubidium, silver, tin, antimony, cesium and bismuth were especially noticeable.

The data regarding the content of rare earth elements (REE), showed no outliers. Their levels lied anywhere between 0.001 to 0.200 μg / L , which does not have any sort of ecological effect.

Elemental analysis of the samples was carried out at the analytical certification testing center of the Federal State Budgetary Institution of Science, Institute for Problems of Microelectronics Technology and High- Purity Materials, RAS (ASITS IPTM RAS). The center is accredited by the Federal Accreditation Service ROSAKCREDITATSIYA. The accreditation certificate is registered in the State Register under No. ROSS RU.0001.513800 dated April 28, 2018. The determination of the chemical composition of the water was carried out in accordance to the NSAM method No. 520-AES / MS "Determination of the elemental composition of natural, drinking, waste and sea waters by atomic emission and mass spectral methods with inductively coupled plasma" (Certificate of metrological certification of the method No. 520-01.00115- 2013-2017 dated March 27, 2017). 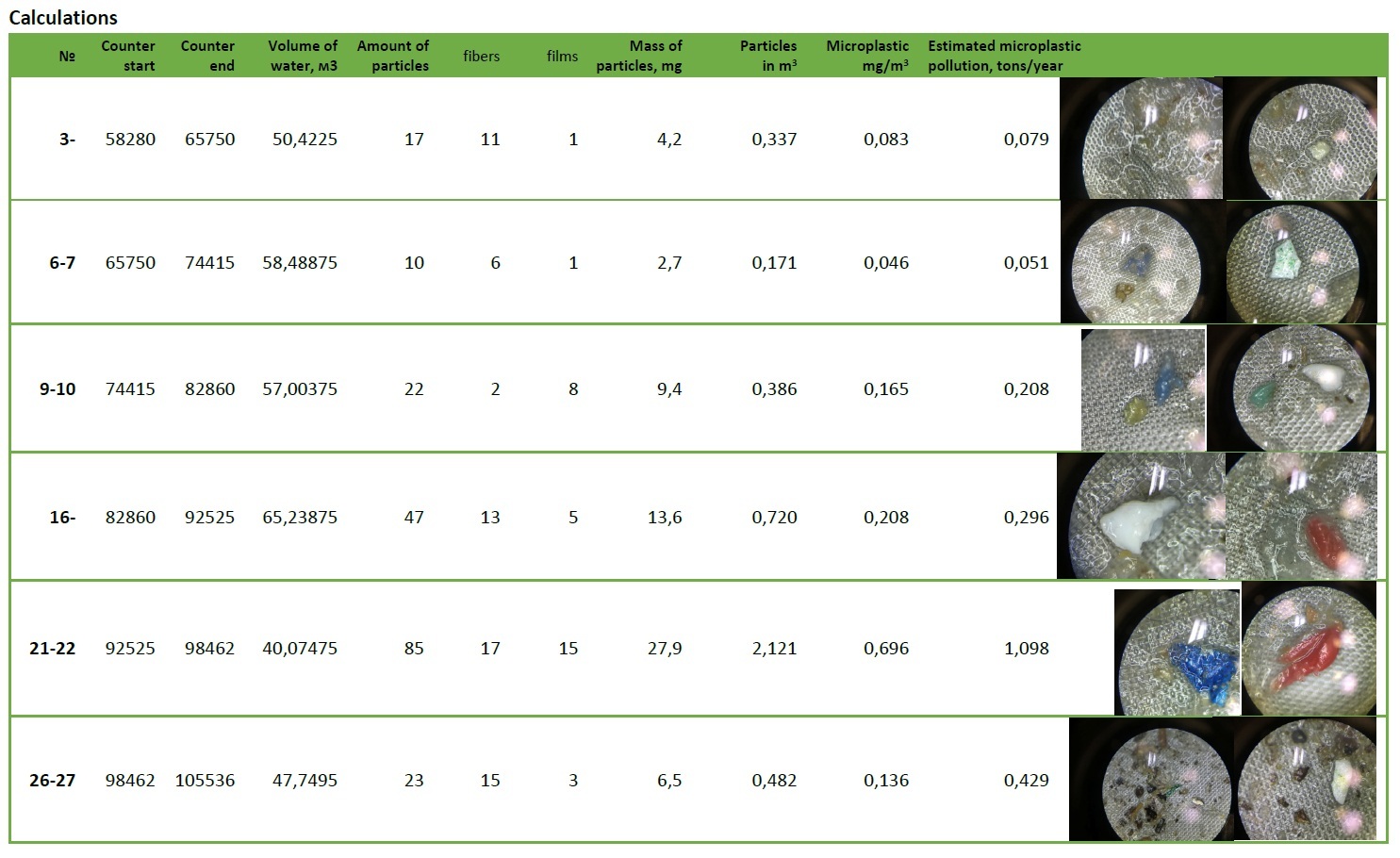 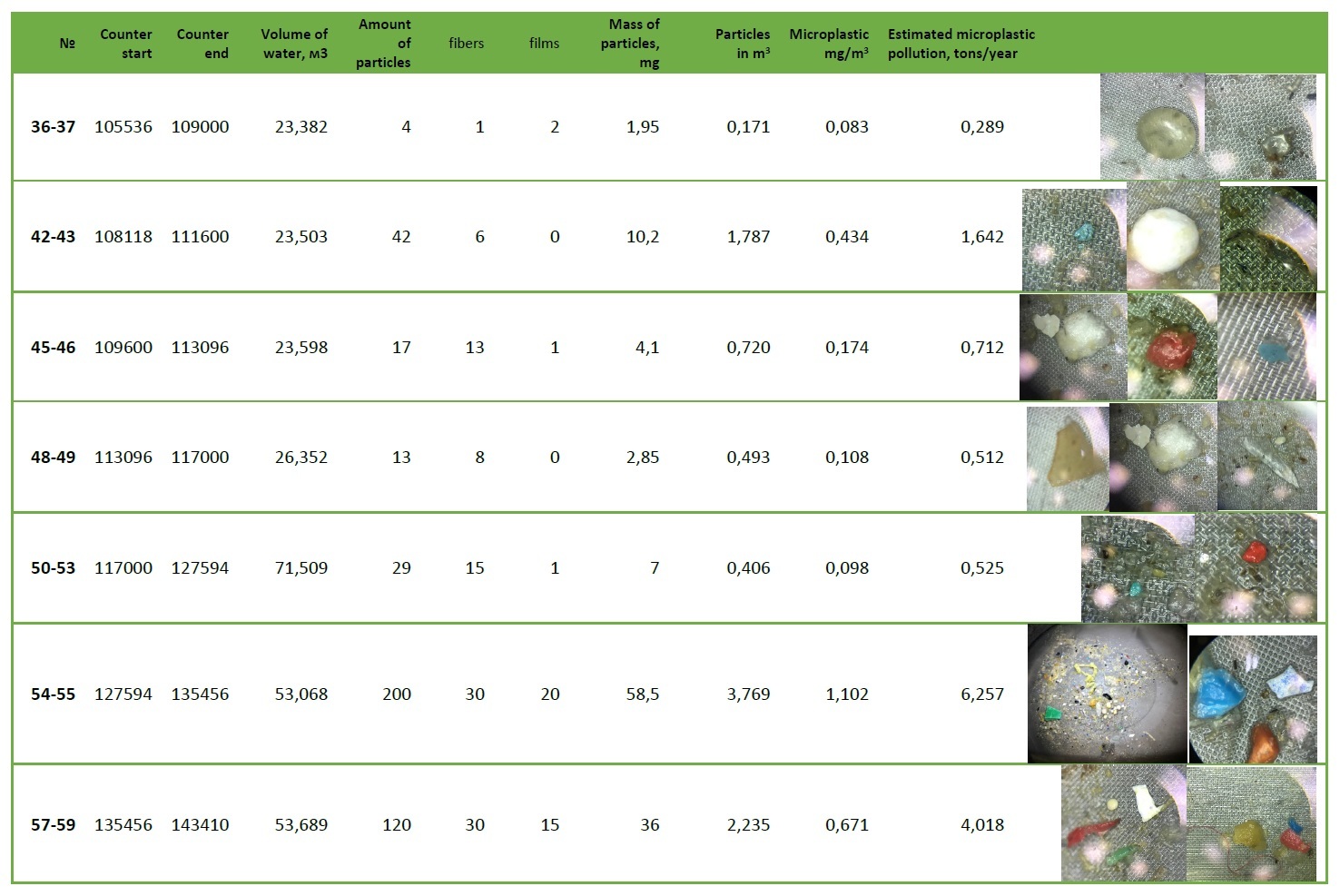 Initially, the analysis of microplastics was seen as a way of obtaining information that could be further extrapolated to estimate anthropogenic load in other parts of the river. However, the content of microplastic was significantly higher than expected, outlining the alarming pollution levels.Synthetic fibers were the most common pollutant at the beginning of the route. Other types of microplastics appeared further down the river on the way to Rzhev, among which were foam balls, fragments of colored plastic, and pieces of polymer films. A large amount of particles could be seen in samples from near the treatment plant in Tver (up to 4 particles/m³). High content of particles could also be seen at points 21-22 and 42-43 (2 particles/m³). This could be due to a rise in the water level, which was bound to wash up the particles located at the shoreline of the river. The sampling for microplastic particles in the Zubtsov - Staritsa area was not carried out due to high amounts of vegetative pollution in the water.

The average content of microplastic is about 1 particle/ m³ . This leads a rough estimate of about 1.2 tons of microplastics being discharged from the river each year. 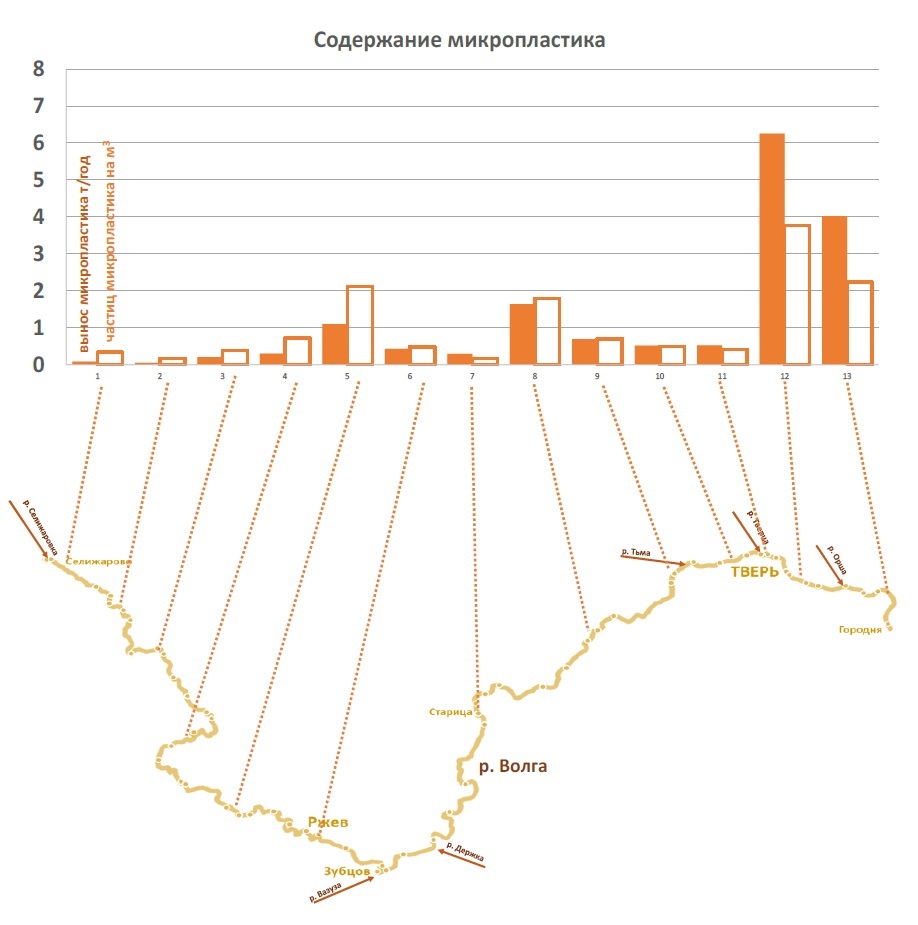 Conclusion
The beauty of the upper parts of the Volga masks a number of serious environmental problems. The noticeable rise in the water level, which took place during the research, reduced the concentrations of various substances but brought in uncharacteristic pollution into the river. These factors must be taken into account when comparing the obtained results with those from other studies.

The unusual geographical conditions of this area result in high contents of iron compounds, manganese and aluminum. The threshold limit value of copper and zinc is highly concerning. The COD value of 30 mg / l can be attributed to the natural background, but the detected values of 70 mg / l and the catastrophic 250 mg / l indicate the possible ingress of effluent from eroded septic tanks or industrial sites.

Anthropogenic load becomes really noticeable below Tver (points No. 53 and 54). In this area, the content of biologic pollutants increases drastically and exceeds the threshold limit value multiple times, while a decrease in the content of dissolved oxygen to a dangerously low level is observed. A big problem for the river is those located along the banks of the SNT, which are not equipped with sewerage. Their effect can be seen clearly in the collected data for point 57.

The most obvious example of human impact however, is the presence of microplastic particles in the water. The amounts of microplastic are tolerable In the Selizharovo area (0.1 to 0.4 particles/m³). The figures in the region of Rzhev and Tver are much worse at 2 and 4 particles/m³ respectively. This could result in more than 6 tons of plastic being ejected from the river each year.! 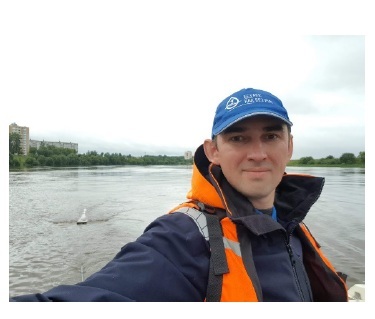